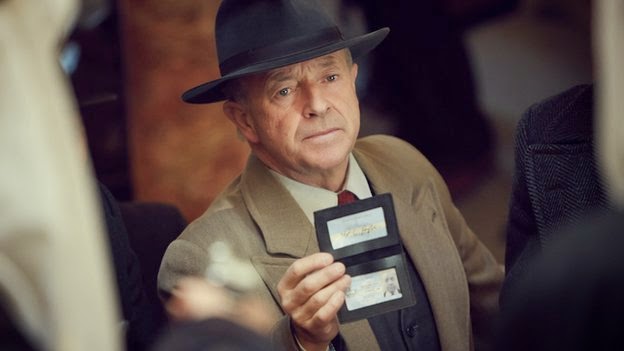 While the events of the past few weeks have added tons of relevance to tonight's Foyle's War, they've also made it difficult for me to view the episode with anything close to detachment. This modern material feels rather out of place in Foyle's noir world, but it's still compelling, and complicated enough that I wasn't able to second-guess the narrative as much as usual.

The episode starts with a young Jewish student, Daniel Woolf, ranting about Britain’s broken promises to his people. His teacher, Elizabeth Addis (see last week’s episode), points out that he’s being a bit cynical about his host-country, but as it turns out, his criticisms may not have been strong enough. That’s foreshadowed when he is assaulted right outside of the building by two thugs. Oddly, his parents want to keep the whole incident quiet.

Anti-Semitism has been on the rise in England after a Zionist terror attack in Jerusalem which provides an opportunity for the racist politician Charles Lucas (not exactly Guy Spencer, Radio Times) to drum up anti-immigrant sentiment.

We see much of this world through the eyes of Lea Fisher, a darkly beautiful Palestinian Jew, who is in England as a student. She stays at the home of a rabbi. The rabbi's son, Nicholas, gives her a tour of London.

In short, post-war Britain is a brutal world where people are forced to become racists because they don't have free healthcare. Example A is Bitter Parent who is trying to find good care for Coughing Child. He runs into Sam at the hospital (while I’d love to see Mr. Foyle shocked for once, I have a feeling he already knows about Baby Wainwright), and she offers him a lift. Ultimately, Sam ends up finding him a doctor and paying for the care herself (compassionate private sector! Yay!). Before that happens, however, the kid has to survive a fire-bomb while he’s staying with Polish neighbors. This provokes a sullen monologue from Adam to the tune of isn’t it terrible that free speech allows bigots to talk? Um, the problem wasn’t free speech, it was corrupt police officers. The whole subplot is a little predictable and, in the end, kind of pointless, but it fits in well with the topic at hand.

The episode seems to perceive the biggest issue on all sides to be people who want to “own” their nation. Britain for the British. Israel for the Jews. At what cost? Defining a nation by race is always problematic; it’s far more helpful to define its citizens as those who abide by certain principles, like freedom of speech. Modern Israel, for instance, allows people of all races to abide within her borders and even be elected to the Knesset. If only the same could be said of the rest of the Middle East.


Speaking of other Middle Easterners, they make a brief appearance, but the story is really about Britain and the Jews. As a favor to the alluring Elizabeth Addis, Foyle is investigating the assault on Daniel Woolf. (I’m more okay with Addis as a love interest than I was last week—but she’s still had precious little character development compared to Foyle's last love interest—the memorable Barbara Hicks in They Fought in the Fields.)

Simultaneously, MI5 has been tasked by a Slimey Whitehall Guy (Alex Jennings) with handling security on a peace conference between the Jews and Arabs. The (increasingly) fun Valentine is in charge of that operation. All of this results in a diplomatic fiasco which Foyle solves rather creatively, in one of the episode's most interesting sequences. 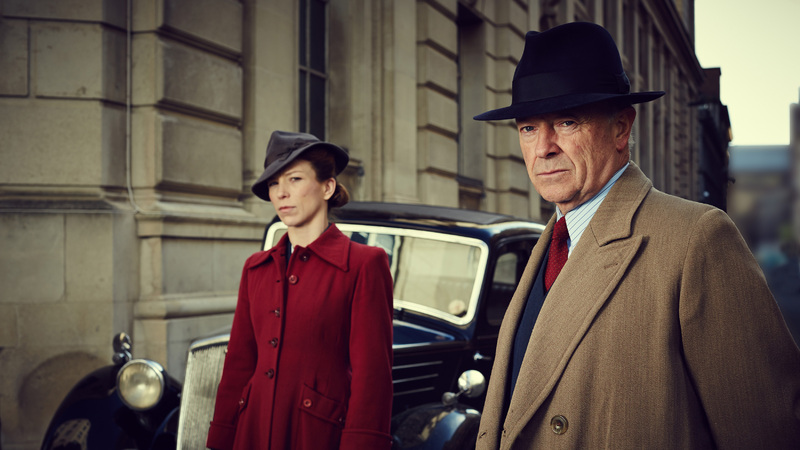 I think I've finally reconciled myself to a lack of old series conventions (Foyle's showdown with the bad guy, etc.), which has significantly improved my opinion of the new series. As ever, Michael Kitchen is terrific, and I've come to appreciate Tim McMullan as the smirking Valentine. Rupert Vansittart is good (if under-utilized) as Sir Alec, and Ellie Haddington is wonderfully reptilian. Honeysuckle Weeks puts in a solid performance as Sam. The fact that Foyle still doesn't know (or hasn't let on that he knows) about the baby heralds some pretty interesting clashes of personality to come. As for Elizabeth Addis, that too is turning out a bit differently than I expected. What does that last conversation mean? Why is she spying on Foyle? When I heard this was to be the last season, I automatically guessed that he would be married off to the country (a la Lord Peter), but perhaps not. Are we to look for a death scene?

SAM: Good heavens! Sir, have you been shot?
FOYLE (under-acting it): Yep. *Dies*

Nah. Way too melodramatic for this show. There are only three Detective Exits available, and since romance and death are out of the question, there's merely one other way for this to go, which means Foyle will probably lose his job again. I'd imagine he couldn't be happier. Maybe he'll take up rock n' roll, or the piano, or tennis.

My review of next week's episode: Elise