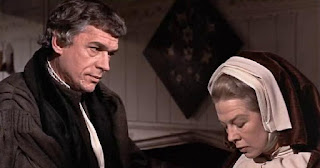 Movies:
While I enjoyed two non-fiction thrillers in Captain Phillips and Valkyrie, it was a third (dubiously historical) film, A Man for All Seasons, that swept me away. Robert Bolt's witty, emotional play is an amazing political fable delivered via fiery, powerful dialogue from a stellar cast of Shakespeareans. I probably just used way too many adjectives, but what the heck, it's great. My review. For June it's a narrow win for Babette's Feast over 12 Years a Slave. A lovely, meandering Danish film, Babette is one of the purest representations of joy that I've seen in a long time. There's also a lot about art, generosity, God, love, and food. Mostly food. This movie really enjoys food. Set in a gorgeous, barren landscape, Babette shows us those little tinges of grace - purple clouds, elegant cliffs, music, feasting, friendship, artistry. (For those who have seen Ordet, it reunites two cast-members 33 years later.) My review. While Band of Brothers didn't affect me in the way it should have - emotionally - it's impossible not to respect the immensity of it. An enormous cast, impeccable production values, and gorgeous cinematography allow it to easily rival any big-budget Hollywood WWII flick. The few actors I kept track of among the chaos were superb, and it's fun to spot cameos from future stars (Andrew Scott, Tom Hardy, James McAvoy, Jimmy Fallon...) The neatest thing is that it's all true; the men really existed. My cousin even knew one of them. My review.

Michael Gambon always adds an aura of class to a film, and these atmospheric, charming adaptations of Georges Simenon's Maigret novels are no exception. Shipping English actors overseas to play foreign characters only works sometimes, but this series pulls it off flawlessly, as it also does with the 1950s noir style. Gambon plays Inspector Jules Maigret, a burly, vague, quirky, intelligent sleuth. Like the Maigret of the novels, Gambon doesn't go for the more sleek, sexy attraction of a genius like Holmes, but a quietly endearing Everyman, empathizing with the beleaguered Parisian working classes, seeking justice in a morally gray world.

12 Years a Slave - How Long Until the Reckoning? 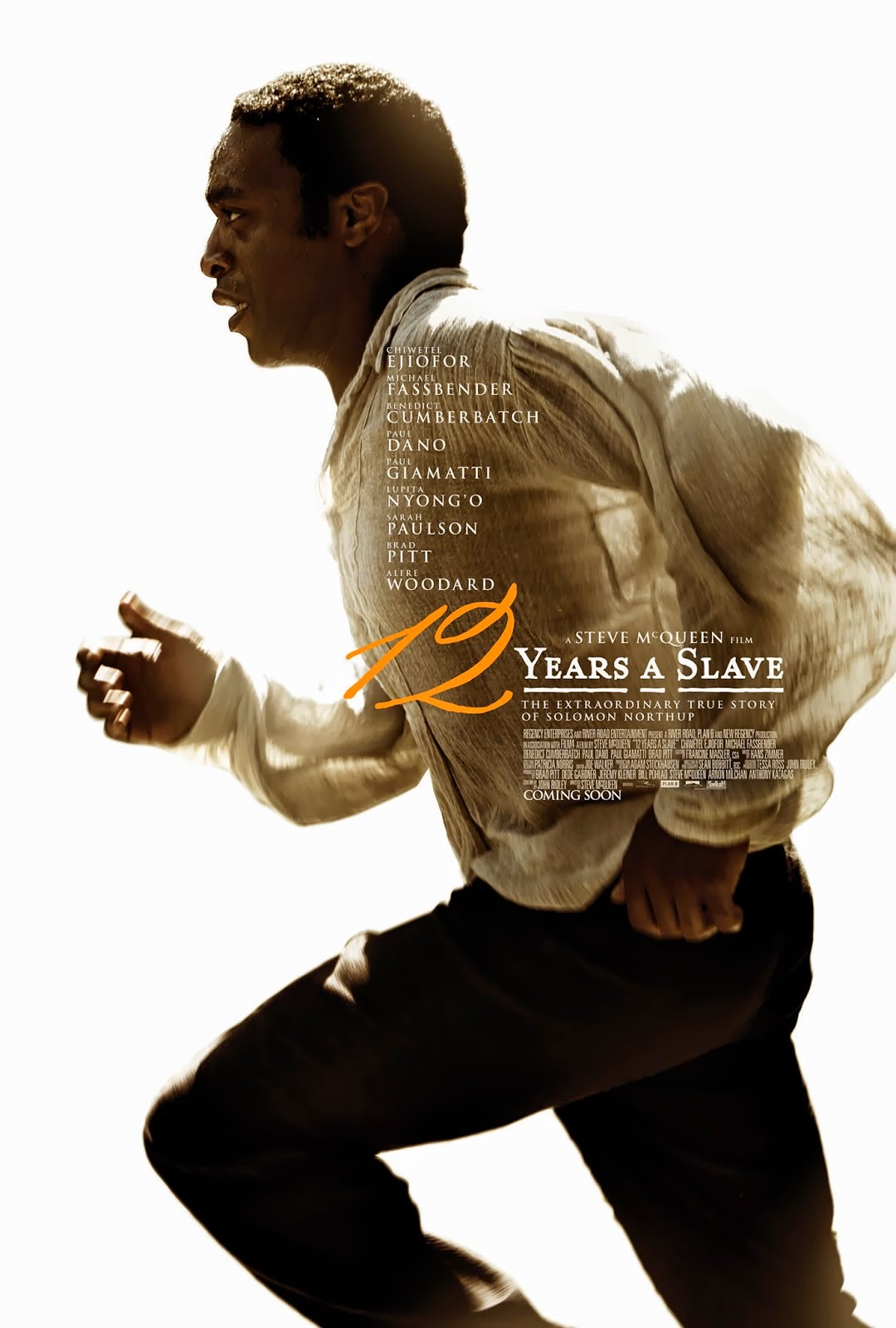 It’s the curse of almost any American movie about race relations to instantly become a political football. I usually ignore the outrage, because in general, these are message movies exploiting furor to distract from dearth of artistry—but 12 Years a Slave is a startling exception.

For one thing, it isn’t a message movie. Well, it kind of is, but it’s not the expected message. This movie isn’t about skin-color, or even prejudice—it’s about slavery. And it’s really about slavery. Easily earning its R-rating, much of the film’s length is spent portraying brutal violence—psychological, physical, and sexual, all this amidst the poverty and privation, hopelessness, nakedness, and cruelty that was the slavery of the American south. It’s graphic, but (except in, perhaps, a few instances) never gratuitously so, never sensationalist, never Tarantino. Indeed, my overall impression was one of restraint, with many long shots, silent but for the sounds of crickets.

And it’s a true story. 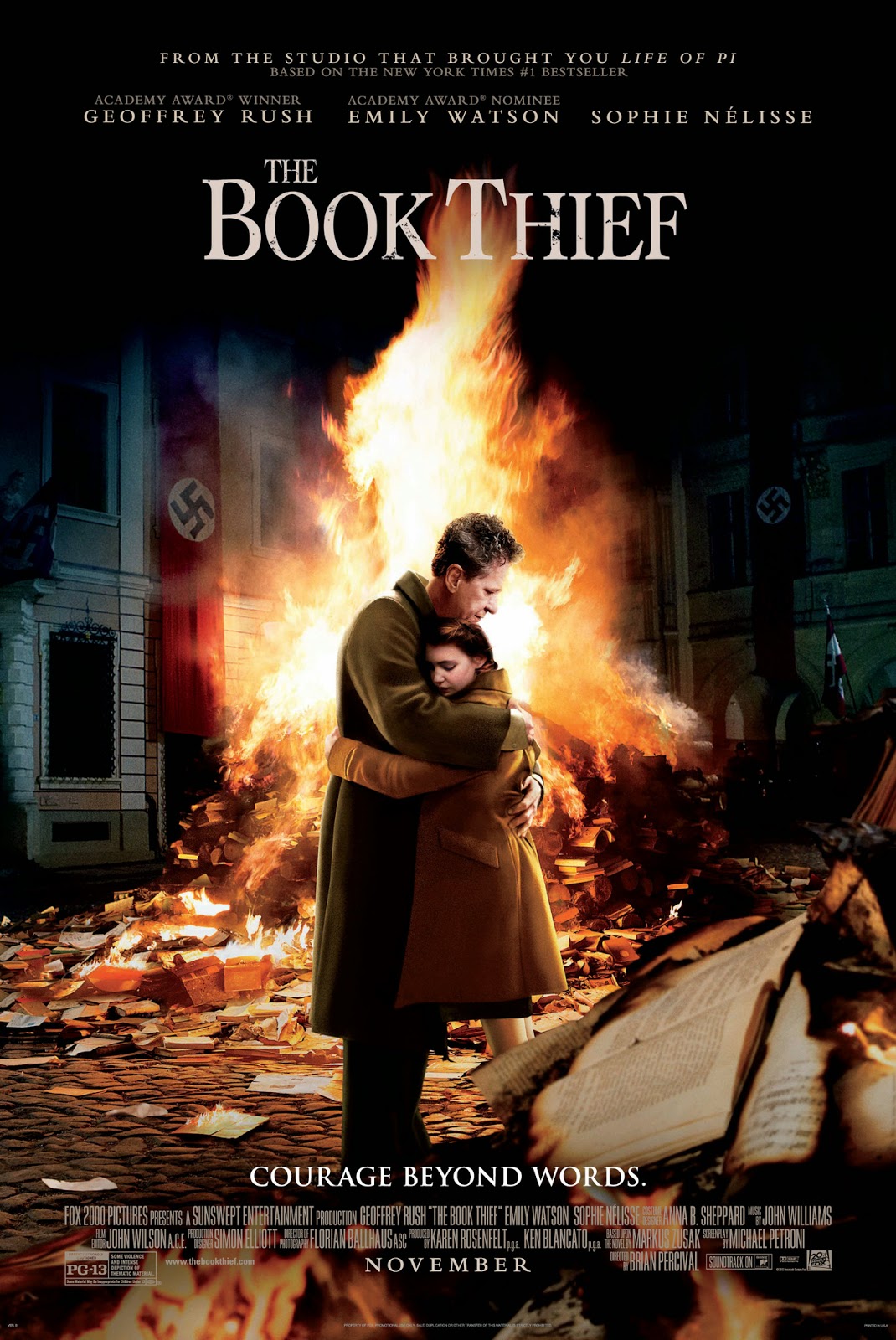 Like Life is Beautiful, this is a movie that succeeds mostly on charm. And despite my bone-deep cynicism about almost everything, The Book Thief crept under my guard. True: it's a story-book vision of a fairy-tale Germany, complete with WWII movie conventions from a different age - hidden Jew, book-burning, over-the-top score, stodgy, sanitized settings - but it turns these things to its advantage, creating not a children-in-wartime film, but a children's film. While the setting is somewhat idealized, I found it beautiful enough to sweep away concerns about realism.

It's based on a book:

Liesel Meminger is a young girl in World War II Germany, who steals her first book from the frozen graveside of her brother. Abandoned, she is taken in by a pair of quirky but affectionate foster parents, with whom she is to endure the war. Her love of words and stories gives her hope in a world where childhood is quickly unraveling.

Liked this one even better than my first experience of Miyazaki: Princess Mononoke, as it maintained the focus on its main character far longer than the latter (which lost itself in the greater plot.) Visually stunning, I quickly found myself wishing to visit the magical vision of Europe that Miyazaki provides.

Somewhere in the cross between steampunk and fantasy, we're introduced to a semi-industrial city on the borders of a rugged, green waste. Sophie is a young, plain girl who works in a hat-shop, and is, entirely by accident, caught up in the affairs of wizards when a mysterious stranger rescues her from a pair of churlish soldiers. Soon after this Sophie is assaulted by a jealous witch. Left with the fall-out of this encounter, Sophie refuses to feel sorry for herself, but sets off into the waste to remedy the problem, where she meets a number of eccentric characters, including legendary wizard Howl. Romance ensues.

From a character standpoint, Sophie is a marvelous heroine, providing a down-to-earth contrast to the beautiful, self-important wizard Howl, though the romance between the two did not quite convince me (her falling for him made much more sense than vice versa), much like that of Mononoke. I think this would have worked better if Howl had been given more character scenes, he was a little bit too idealized and feminine (Manic Pixie Dream Boy?). The whole relationship felt like Jane Eyre opposite a more perfect Mr. Rochester. But quibbles aside, it's still a lot of fun, incredibly creative and beautiful. Miyazaki, once again, thoroughly wowed me with his sumptuous visuals. I'll be watching again.