My review of last week's episode: The Big Four

Like most TV shows throughout the last decades, Agatha Christie's Poirot has become progressively darker, but Dead Man's Folly is a welcome return to a simpler age (similar to The Big Four, which I had not seen when I first saw this episode). Yes, a simpler age with murder, adultery, and other deadly sins, but they're all mercifully off-screen, and I'll have no qualms in watching this with my younger siblings. (True enough, I love the Suchet adaptation of Orient Express, but it's nice to have something lighter once again.)

With summer in the air, wealthy squire Sir George Stubbs and his fragile, childlike wife Hattie plan a grand fête for their Devonshire neighbors to celebrate their recent acquisition of Nasse House. Fancy dress, fortune telling, and a coconut shy are all scheduled, as well as a murder hunt designed by mystery novelist Ariadne Oliver. But Mrs Oliver is convinced something is amiss, and asks Hercule Poirot to attend the festivities as a means to put her mind at rest.

Read more »
Posted by Hannah Long at 3:46 PM No comments:

And so it begins. The gang is officially together again for the first time in thirteen years (though also the last, for Japp and Ms. Lemon.) Unfortunately, it’s only for a few scenes in this eccentric but enjoyable addition to the Poirot series. The Big Four was Agatha Christie’s attempt at a conspiracy thriller, mixed among the usual Poirot body-in-the-library cases. She couldn’t quite leave that format behind, and her conspiracy conveniently takes the shape of multiple murders in country houses. Mark Gatiss and Ian Hallard’s adaptation is at its strongest when it is focusing on these quirky, clever episodes.

Because of the relative insignificance of the terrorism (especially in light of our own age), it’s a little hard to build up a conspiracy thriller feel around the mysterious Big Four gang. Gatiss and Hallard give it a good try, but like Christie, can’t quite shake off the limitations of Poirot’s format.

It’s 1939. World War II is brewing, and a group called the Peace Party has formed to foster good faith between nations. It is led by an American millionaire (isn’t is always), Abe Ryland, and a French scientist, Madame Olivier. But beneath their veneer of benevolence, lurks a more sinister purpose—or so claims Tysoe, a journalist and conspiracy theorist, played a bit blandly by Tom Brooke (you may remember him from Sherlock and Foyle’s War.)

Read more »
Posted by Hannah Long at 3:33 PM No comments:

I was not a huge fan of The Hunger Games novels, but Catching Fire had enough spark (ha), talent, and fine scripting that I was won over. It combined good visuals with a perfectly paced storyline, headed up by the ever-charismatic Jennifer Lawrence. Two great teasers have come out (my favorite is the creepy political commercial), and here's more of the same:


As for The Hobbit...well, I try and suspend my hopes. They've improved marginally as we go along (my reviews of The Hobbit: An Unexpected Journey and The Hobbit: The Desolation of Smaug), but still manage to completely miss the heart of the book: that this is a story about a hobbit, not a war, or a tragic, sexy dwarf hero, or an epic battle between good and evil. The world would be a better place if we remembered that. But, this trailer's kind of cool. I'm a sucker for visuals, and if there's anything Peter Jackson can do, it's visuals:


Lastly we have The Maze Runner, based on the young adult novel of the same name. I wasn't impressed with the book, and I doubt I'll like the movie. Action, neat premise, survival stuff, great. But characters? Not a one. 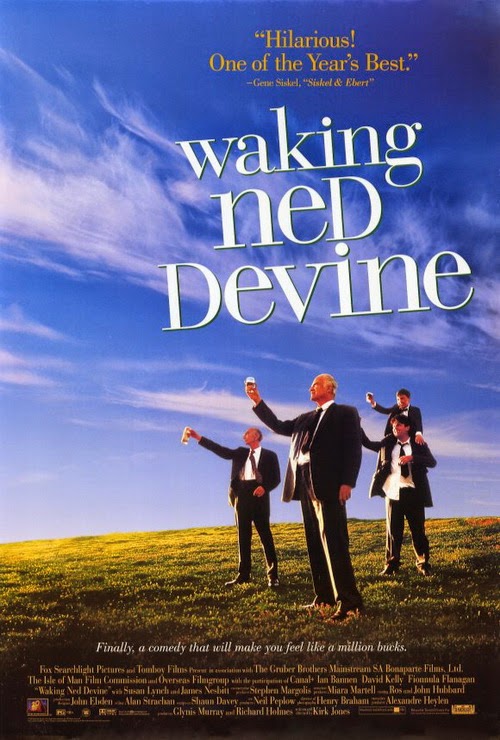 Ireland, as a subject in fiction, lies in the curious hinterlands between fantasy and reality. While the gritty, ugly violence in the North remains a present memory, Éire cannot quite shake off her aura of romance. Even in the bleak urban setting of films like Into the West, a hint of the mystical remains.

Waking Ned Devine embraces the magic side of Ireland, perhaps to too great an extent, forgetting to ground itself in a harsher reality. Yet even in its absurdest moments, the talent and charm of the cast anchor the story, lending just a touch of gravitas to what is ultimately the tale of leprechauns stealing gold.

Our chief leprechaun is the irrepressible Jackie O'Shea, played with panache and roguish delight by Ian Bannen. His best friend, and every bit his equal, is lanky, timid Michael O'Sullivan (the great David Kelly). They live in Tullymore (Tulaigh Mhór), an idyllic coastal village with 52 inhabitants. When Jackie and Michael deduce that a local has won the lottery, they concoct a string of harebrained devices to identify and ingratiate themselves to the “lucky sod.” It takes a while to discover that he is, in fact, elderly fisherman Ned Devine, who promptly after realizing his win, died from the shock of it. I like food. There, I’ve said it. In a society obsessed with either parceling out each meager calorie or splurging on sugary, prepackaged excess, Babette’s Feast is a delight of measured restraint, bounty, and artistry. Wait, am I talking about food anymore?

Not really. On a number of levels, this leisurely film is very unusual. There’s a long period of set-up, as we learn about Martine (Birgitte Federspiel) and Filippa (Bodil Kjer), the beautiful daughters of a strict minister who lives on the coast of Jutland in Denmark (they’re named after Martin Luther and Philip Melanchton, if that tells you anything.)

We follow them as they are courted by a soldier and an opera singer, two wayward but sincere outsiders, wooed by the women's kindness and beauty. Ultimately, both sisters reject these men in their devotion to a simple life, lending this first act a feeling of regret and memory.

These memories spring up once again many years later when one of the erstwhile suitors sends Babette (Stephane Audran, Brideshead Revisited), a French refugee, to shelter with the two elderly sisters. Uncertain at first (after all, having a servant is an indulgence), Martine and Filippa grow to love Babette, who lends her cooking skills to their ministry. All of this is much welcomed by the congregation, who happily exchange gruel for thick, savory porridge.

Read more »
Posted by Hannah Long at 3:39 PM No comments: 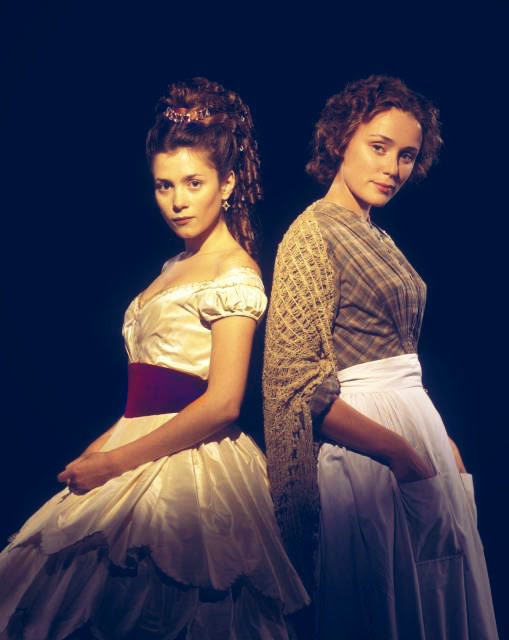 “I was just playing a part.”

G.K. Chesterton once said that Charles Dickens was the poet of the fog. Nowhere is it more evident than in Our Mutual Friend, a massive, rambling tale of money, and murder amid the murky mists of the Thames.

It's about honesty, and true love. But also, it's mostly about stalkers (there are seven). And not only dudes obsessed with beautiful women, but greedy rogues tracking down any embarrassing secrets in the lives of rich public figures, or jealous rivals shadowing their opponents.

Dickens was already fascinated by the idea that we cannot really know what goes on inside the hearts of our fellow men, and Our Mutual Friend further complicates this theme by incorporating the devious facades of high society and its occupants.

Read more »
Posted by Hannah Long at 8:19 PM No comments:

I'm sure you've all heard about the late Louis Zamperini in the last week...the Olympic runner, the WWII POW, the Christian missionary.

What you may not know is that his life story has been adapted into an upcoming movie, written by the Coen brothers, directed by Angelina Jolie. The cast is pretty obscure, but I've seen Domhnall Gleeson, Garrett Hedlund, and Luke Treadaway, supporting actors, in British films before (because this is me, remember.) Hopefully the Coens will save this from being a standard, rather dull inspirational film.

With Son of God and Noah behind us, it seemed like our requisite number of annual Hollywood Bible-themed epics had passed, but lo and behold, along comes Exodus: Gods and Kings.


I'm wowed by the spectacle (looks like what Noah wanted to be) - but I'm skeptical about the storytelling. On the other hand, I'm a long-time Christian Bale fan, and I've enjoyed Joel Edgerton as well. My favorite adaptation of the Moses story will probably always be The Prince of Egypt, frankly. Yes, the animated musical. Incidentally, Prince also has my favorite on-screen representation of God as well, so take that, insipid hippie protagonist of Son of God. 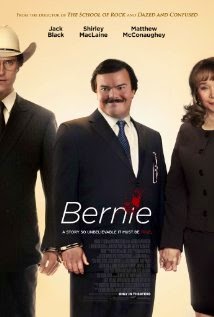 “I think it is safe to say that while the South is hardly Christ-centered, it is most certainly Christ-haunted.”
― Flannery O'Connor

Based on a true story, Bernie is the tale of an assistant funeral director (Jack Black) who quickly, through charm and philanthropy, works his way into the heart of a small town. When he befriends Marjorie Nugent (Shirley MacLaine), a cold-hearted heiress who the town hates just as much as it loves him, little does he realize how much he's risking. Marjorie becomes more and more controlling, and Bernie, sweetheart that he is, can't tell her no, even when she's driving him crazy. Eventually, something's gotta snap. And it does.

This movie is like a primer on Life in the South. Shot in a drama/documentary format, it interviews elderly church-women (DLOL's - dearliddleol'ladies), cheerful, foul-mouthed farmers, and matter-of-fact store-owners.

If you've lived in the south, you know all these people. In fact, the overall effect is so realistic that I was never sure which were actors and which were the real townspeople of Carthage, TX (it turns out there was a mix.) And it's clear-eyed enough to show the town in its beauty, but also its fallibility, given that this is a black comedy about crime and public opinion. 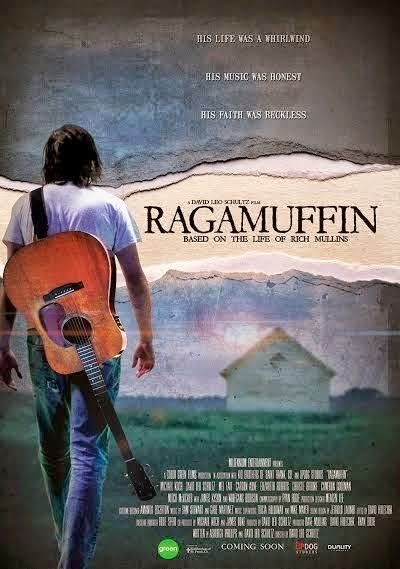 Well-known skeptic David Hume once traveled twenty miles to hear celebrity evangelical George Whitefield preach. When asked if he believed what Whitefield said, Hume replied: "No. But he does."

If there was anything I could tell about Rich Mullins, it was that he did. That's impossible to fake, and Ragamuffin, the indie biopic of Mullins's life, doesn't. However, it has its moments.

Beginning in Rich's troubled childhood on a mid-western farm, the film stretches through college, his musical career, and retirement to a Navajo reservation in New Mexico. One of the most significant problems is pacing, and I'd say that at least half an hour could have been lost with no ill effects.

While quickly proving that it is no bright, sunny Christian flick, Ragamuffin does at times spin into the opposite pitfall of self-important hipsterism. Michael Koch is impressive, given his meager film experience, but he can't quite play someone as sincere as Rich (I mean, how can you be a sincere impersonator?) Koch's character is angsty, angry and considers himself a free spirit. And while I didn't know him personally, that wasn't my impression of Rich Mullins.

Read more »
Posted by Hannah Long at 3:35 PM No comments: