The Son of God - Movie Review [Actually, this is an excerpt from the relevant portions of my review of the TV miniseries. Since I haven't seen the film, there may be a few inconsistencies, but I felt this commentary is still relevant.]

“There are the kind of thoughts which in combination create the impression that Christianity is something weak and diseased. First, for instance, that Jesus was a gentle creature, sheepish and unworldly, a mere ineffectual appeal to the world….[But in the New Testament] I found an account, not in the least of a person with his hair parted in the middle or his hands clasped in appeal, but of an extraordinary being with lips of thunder and acts of lurid decision, flinging down tables, casting out devils, passing from the wild secrecy of the wind from mountain isolation to a sort of dreadful demagogy; a being who often acted like an angry god—and always like a god.”
-G.K. Chesterton, Orthodoxy

I have high expectations for Jesus. Of course, it’s not fair to give The Bible’s producers a break because of the intense levels of scrutiny—they knew they had to get Jesus just right, if they got anything right. So most of my criticism is focused on Diogo Morgado’s portrayal of the Son of Man. To be fair, nobody will ever be able to play Jesus correctly (whether they should even try is another subject), but regardless, there are some things one should remember if you want to do things by the Book:

In 2010, the Coen Brothers (infamous for such bizarre epics as O Brother Where Art Thou) released True Grit, a remake of a John Wayne movie. What happened next took everyone by surprise: It was a hit. In fact, it pretty much dethroned the original, with its extraordinary blend of moral clarity, black humor, and phenomenal acting.


I have two primary comments.


One, I never knew that Leaning on the Everlasting Arms was such an excellent Western theme song. It should have been obvious.


Two, it’s a crime that Hailee Steinfeld’s name was not on the front of the case. A crime. Only seldom (I think of Christian Bale and Q’orianka Kilcher) have I seen such impressive child acting.


On that note, it’s really Steinfeld (then fourteen), as Mattie Ross, who carries the movie, despite the presence of big names like Jeff Bridges, Matt Damon, and Josh Brolin.

Just mentioning this movie in our household is akin to an act of blasphemy. Indeed, after smuggling it inside, my brother Sam and I watched it with the volume turned down low whilst everyone else was asleep.

The reason is that among period drama fans the 1995 Pride and Prejudice miniseries is Mecca. A masterpiece of casting, direction, and delivery, there’s really nothing I can say against it.

It’s a further testament to our familiarity with the story that my sixteen-year-old brother (brother, mind) was full of detailed, enthusiastic criticism. “That’s not Mr. Bennet,” he opined as a grouchy Donald Sutherland mumbled his lines. As a long, single shot captured the Netherfield Ball (Sam commented, appreciatively, on the camera-work): “Is that Mr. Bingley? No! Look at his hair!” The general lightness of the acting, and lack of restraint in comparison to the TV series, prompted: “They’re all too young!”

Read more »
Posted by Hannah Long at 5:18 PM No comments:

Lawrence of Arabia is about power, posturing, politics, pride, and pettiness. And spectacle. Big-screen epic spectacle.

If there’s one thing that provides that spectacle, it’s the sweeping panorama of the barren desert. I don’t think I’ve ever seen a film which so fully impressed on me the vastness of it, and the corresponding inconsequentiality of a man on a camel, with only a water-skin between him and death.

It’s quite ironic, isn’t it? And this film lives and breathes irony, placing characters in so many incongruous situations that it gets a little ridiculous.

The first is a placard on a peaceful country road marked “DANGER.”

It’s not much of a spoiler that Lawrence dies an ignominious death—thrown from his motorcycle into a clump of bushes—in the first five minutes of the film. For a while, I was confused as to why the filmmakers chose to start us here. I recognized the heavy contrast of cutting from a motorcycle accident in verdant Dorset to conversation in the halls of a British colonial outpost to the barren, utterly foreign desert, but I felt it sucked the uncertainty from Lawrence’s story—we knew he lived, so what suspense was there?

Empire of the Sun - Movie Review 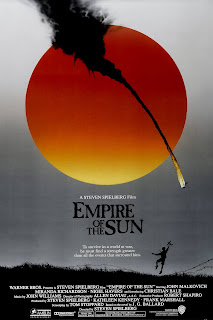 If you haven’t heard of this movie, don’t feel bad. Part of my affection for it may be the fact that it’s one of Steven Spielberg’s little-known masterpieces, hiding in the dusty corners of his 50-film history. It is based on J.G. Ballard’s novel Empire of the Sun, a semiautobiographical story of his childhood in China. Ballard’s stand-in is Jamie, a spoiled young Brit living in the wealthy International Settlement, the only sector of Shanghai which the Japanese have not occupied. When, after Pearl Harbor, the Japanese invade, Jamie and his parents are separated, and he is thrown into a world for which he is totally unprepared. For him, this is the real start of World War II.

I think Empire of the Sun is a movie that splits opinions. A lot depends on expectations. It might style itself as a historical epic, or a commentary on war or race or other abstractions, but it’s really about a little boy. It is not plot-driven but character-driven, like Lawrence of Arabia, it is a very long, slow film in which the plot is really the hero. If one cannot empathize with Christian Bale’s Jamie Graham, the entire movie falls apart.

I’ve never had trouble with that. Jamie is, to me, a fascinating character. He is spirited and imaginative, with a comic, conceited naivety that only children with posh English accents can achieve. Thirteen-year-old Christian Bale is extraordinary, throwing his entire heart into the character and delivering one of the greatest child performances of all time.

My review of last week's episode: The Sign of Three


Though he may flourish among his brothers,
the east wind, the wind of the Lord, shall come,
rising from the wilderness,
and his fountain shall dry up;
his spring shall be parched;
it shall strip his treasury
of every precious thing.

In other words, don't mess with the East Wind. And speaking of brothers, what in the world does he mean when he says "the other one"?

After the highs of the first episode, and the lows of the second, I really wasn't sure how to approach His Last Vow. I shouldn't have worried. It's a really tightly scripted episode, with impeccable pacing and a bundle of surprises, if somewhat lacking in dramatic tension compared to last season's finale. There shall be spoilers.

Sherlock has always, really, been about three things: power, love, and truth—and how they interrelate. His Last Vow brings all three into play, illustrating the show's vision and how it has changed. Must love obscure the truth? Is information the only form of power? Is truth naturally hostile to love?

Kaitlyn Elisabet Bonsell observes in a Breakpoint article that in A Scandal in Belgravia, Sherlock despises Irene’s use of sex for power. He scoffs, “you cater to the whims of the pathetic and take your clothes off to make an impression. Stop boring me and think. It's the new sexy.” According to Sherlock, mental prowess is a much more effective form of influence, and Irene's use of sexual attraction to shock is more than just immature, but boring. (Thoroughly agree—Miley Cyrus is such a reactionary.)