The Scarlet and the Black - Movie Review 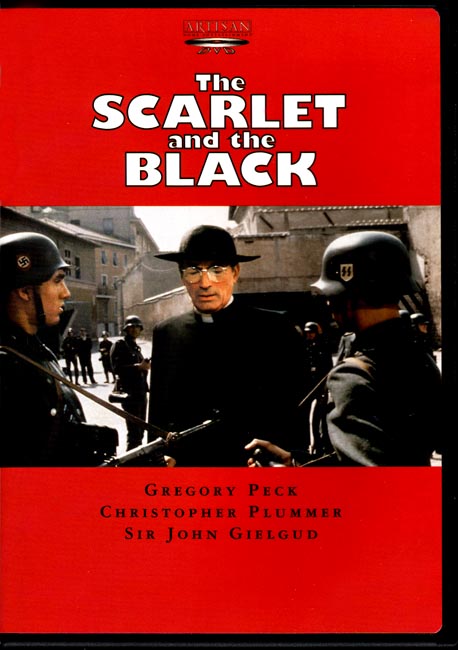 Gregory Peck, Christopher Plummer, and John Gielgud all in one film? Yes, please.

I came across this 1981 made-for-TV movie during my NaNoWriMo research on WWII. Necessarily, I read about a number of fascinating resistance groups. There was Dietrich Bonhoeffer and the Valkyrie Plot, Sophie and Hans Scholl and the White Rose, Corrie ten Boom (of The Hiding Place fame,) and, one of most fascinating, Hugh O'Flaherty, the Vatican Pimpernel.

The Scarlet and the Black is a dramatization - no, that's the wrong word - it's an account of Monsignor O'Flaherty's many adventures during the war. O'Flaherty (Gregory Peck) was an Irish priest, an excellent golfer, and a master of disguise. He saved over 6,500 people during the war, earning him the nickname of "The Scarlet Pimpernel of the Vatican." He even had his own personal Chauvelin to play arch-nemesis, SS-Obersturmbannfuhrer Herbert Kappler (Plummer), a callous war-criminal.

Read more »
Posted by Hannah Long at 7:34 PM No comments:

To End All Wars - Movie Review 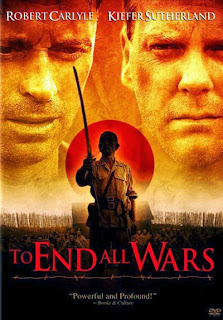 As a Christian, I always enjoy a movie that features questions about the infinite, and To End All Wars certainly does that. It has wonderful ingredients. A good premise, decent production values, and great music. Several very prestigious cast members (Robert Carlyle, Kiefer Sutherland, James Cosmo and Mark Strong being the best), do their best with less than intriguing characters.

It goes to show that just because a movie is rated R and features brutal violence, doesn’t mean it can’t be preachy. Immediately, after a brief, clumsy introductory sequence narrated by Ciaran McMenamin (inexplicably casted as the main character) we are plunged with the small band of Scottish soldiers into a 1942 Japanese POW camp. We know nothing about these soldiers, and for the rest of the movie, we don’t learn anything else. That’s almost true. They have little to no personality, and as Mark Twain pointed out, it's hard to care about the death of a character who never lived in the first place. Briefly, I was interested in Robert Carlyle’s conflicted Major Campbell, but he quickly morphed into a predictable character with a foreseeable end.
Read more »
Posted by Hannah Long at 4:57 PM No comments:

The Hobbit: The Desolation of Smaug - Indiana Jones Hits Middle-Earth

Review of The Hobbit: An Unexpected Journey

It turns out I was wrong. Like the first film, The Desolation of Smaug is certainly a mixed bag, but coming up on my horrendously low expectations, it quickly soared into my good graces.

The first movie was so disappointing for several reasons: Radagast. The Goblin King. Stupid dwarf humor. Black magic. Boring visuals. Lazy, ham-fisted foreshadowing of the other films. Ridiculously large, cartoonish action sequences. Not being Lord of the Rings.

How does film two compare?

Read more »
Posted by Hannah Long at 4:47 PM No comments:

Sometimes you just have to say something.

I’ve been meaning to start a movie blog for a while, but it was last night’s movie that left me aching for somewhere to air my thoughts. I didn’t like it. It’s not that it was bad, it was that it was so close to good that it was terrible. Great cast, great music, great premise…terrible execution.

But since this is the first post, I’ma gonna review something else first. Let's be positive! (Really, let's not. Not my thing.)

Just a few comments on the purpose of this blog

1. Movie reviews. I shall review movies.

2. These shall be short reviews because: college.

3. These reviews will be from a Christian perspective. That said, I'm no prig. I believe in storytelling, not preaching, and I certainly don't feel like I have to agree with a movie to appreciate it for what it is.

4. There will be good and bad reviews. I'll try and type up something quick about whatever I've been watching, but generally, this is a quick film diary, a little messy, a little rushed.

So now, I'll post a few archive reviews from my other internet home, Longish.

Posted by Hannah Long at 4:34 PM No comments: