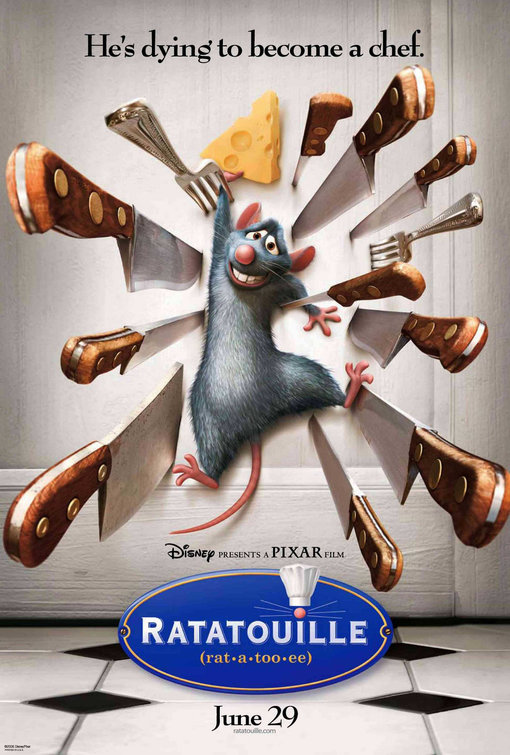 But then, Brad Bird is the man when it comes to upending expectations.

Remy is a country rat with an unusually acute sense of smell. While this gift leads him to become a food connoisseur, his more practical family employ him to be the Poison Detector. Remy, on the other hand, has other ideas. Inspired by a cookbook entitled “Anyone Can Cook,” he begins on a gourmet career that will lead him to the very heart of Paris. There, he makes friends with an awkward garbage boy named Linguini, and using this human companion, makes a splash in the culinary world.

Ratatouille manages to avoid the majority of animal-film clichés. Remy is chipper and positive, but he is also intelligent and complex; Linguini has a life beyond just being the Faithful Master. It avoids cuteness, and though there’s a brief anti-cruelty-to-animals moment, it sidesteps more heavy-handed commentary, such as the anti-gun theme in Bird’s earlier film The Iron Giant. The animation is interesting and artistic, creating a beautiful, atmospheric vision of Paris. The cast is almost devoid of caricatures, and the major one I remember is offset by development from a parallel character.

I think the greatest strength, however, is the premise itself. It’s not as cleverly orchestrated as that of Toy Story or Monsters Inc., but it’s certainly another high point for Pixar, pushing way out of the usual territory for children’s films, or even, for that matter, your average blockbuster. And they not only take on this unusual premise of a cooking rat, but they also delve into the deeper themes of creativity and excellence. Remy doesn't want to just do his job, he wants to excel at it. He wants to create something worthy and artistic. He is not a self-gratifying mass-producer...he is a servant, hoping for quality, rather than efficiency. It is this servant's heart that elevates the film from mere underdog-vs.-institution rote.


Another high point is the deliciously acidic food critic and antagonist, Anton Ego, voiced with panache by Peter O'Toole. One thing I enjoyed was just how complex, and well-structured the dialogue was for a children's film. O'Toole gets some of the best bits, like this little gem:

It's worth it just to hear that, but Ego's final monologue is even better.

Overall: a superb contribution from Pixar, easily watchable for both children and adults, well written, beautifully animated, exquisitely plotted. Another hole in one for Brad Bird.